This is a prototype of a project done on a client website. For their home page, the client wanted to have a events panel with a carousel of all the speakers at their upcoming event. The carousel was to include the speaker name, avatar and a short bio.

What is a JSON file?
JSON stands for Javascript Object Notation. It is a text file used to exchange data between browser and server. The data is stored as javascript objects.

Example of a JSON file

About Mustache Templating
Mustache is an open-source template system developed for languages like Javascript and PHP. We are using Mustache as the templating system for this project. Mustache Templates have tags as indicators for the placeholders where data will be added in the final layout.

The html code on the page for the carousel

view demo get code from github

I hope you found this article useful and interesting.

Have you used JSON or Mustache templating in your project? Do you have any thoughts on how to improve the process?

Other articles in this series … 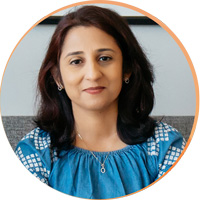 Hi, I'm Femy Praseeth. I'm a WordPress developer specializing in custom themes and websites that are fast accessibile and responsive.
How can I help you?

Endorsed by these folks ...

Femy is not only very professional, technically savvy and reliable, she is a joy to work with.

I'm Femy. I'm a WordPress developer specializing in custom themes and websites that are fast, accessible and responsive. Send an email to chat about your project specifics.